Figure out what the program does and the output

Again figure out what the program does and the output

Compare above two program , you will find the use of function .

# C Function Give name to the task

A function is a block of code that performs specific task. Tasks of a complex program are divided into functions and these functions are called wherever needed in the program. Dividing complex problem into small components makes program easy to understandand use.

There are two types of functions in C programming:

Q) List the Standard Library functions that you have used until ?

The functions created by a user are called user-defined functions.

Any user-defined function has 3 parts:

General syntax for function declaration is,

When a function is declared to perform some sort of calculation or any operation and is expected to provide with some result at the end, in such cases, a return statement is added at the end of function body. Return type specifies the type of value(int, float, char, double) that function is expected to return to the program which called the function.

Note: In case your function doesn't return any value, the return type would be void.

The body is enclosed within curly braces { ... } and consists of three parts.

Function call is simply calling the function in main program to perform its task.

When a function is called, control of the program gets transferred to the function.

A basic example for user-defined function is given below:


# Passing Arguments to a function

It is possible to have a function with parameters but no return type. It is not necessary, that if a function accepts parameter(s), it must return a result too. 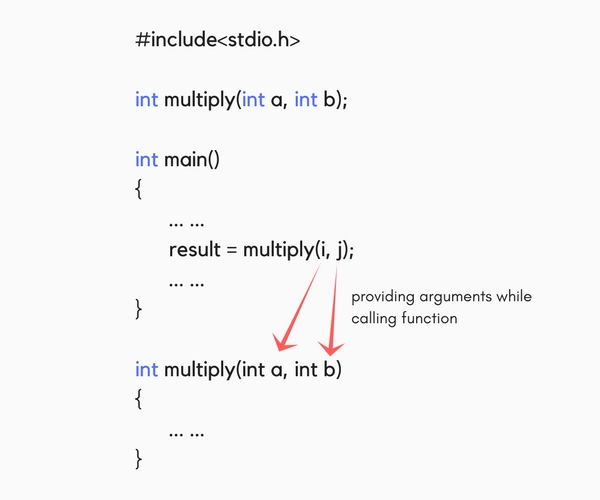 # Returning a value from function 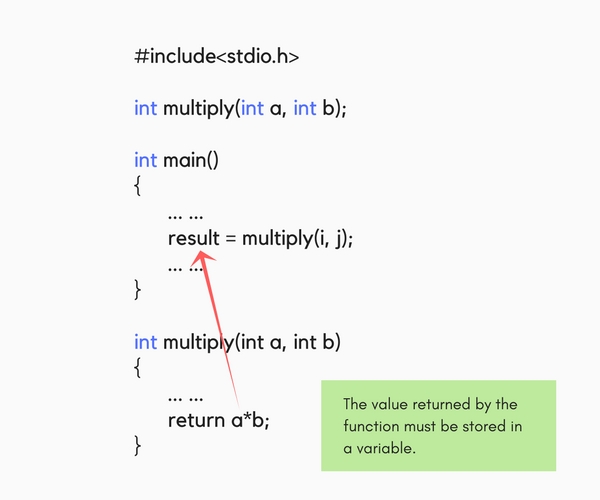 The data type of the value returned using the return statement should be same as the return type mentioned at function declaration and definition. If any of it mismatches, you will get compilation error.

In the next tutorial, we will learn about the different types of user defined functions in C language and the concept of Nesting of functions which is used in recursion.