In this article, you will learn about Streams Based Input/Output in C++ .

C++ Input/Output implement concept of stream .It is an object-oriented alternative to C's FILE-based streams from the C standard library.Stream is the sequences of bytes or flow of data , which acts as a source from which the input data can be obtained by a program or a destination to which the output data can be sent by the program.

It is flow of data bytes from a device (e.g Keyboard , disk drive) to main memory

It is flow of data bytes from main memory (i.e program) to a device

Stream class is the collection of data and the methods necessary to control and maintain flow of data or stream .These stream class are declared in the header file iostream.h . The different stream class available in C++ are defined in following hierarchical order. 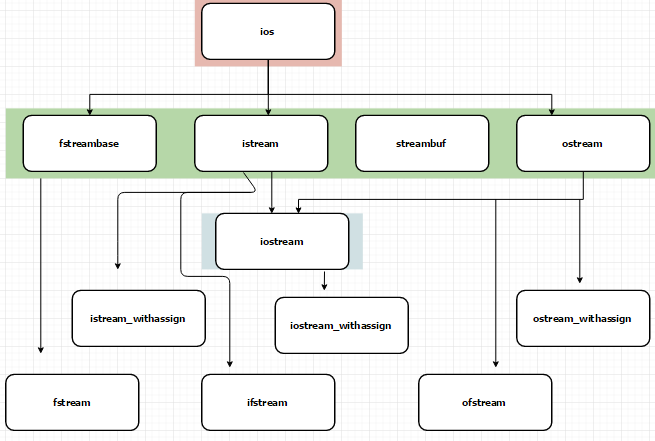 Unformatted I/O operation do not allow user to read or display data in desired format. The unformatted operations supported by C++ are :

The insertion operator (<<) and extraction operator (>>) are overloaded operations which are used for reading and writing data to/from input/output. The predefined object cout is an object of ostream class. The ostream is said to be connected with standard output devices (i.e screen).The cout is used in conjunction with insertion (<<) operator . The C++ compiler also determines the data type of variable to be output ans selects the appropriate stream insertion operator to display data

The predefined object cin is an object of istream class. The istream is said to be connected with standard input devices (i.e keyboard).The cin is used in conjunction with extraction(>>) operator . The C++ compiler also determines the data type of input data ans selects the appropriate stream extraction operator to read data